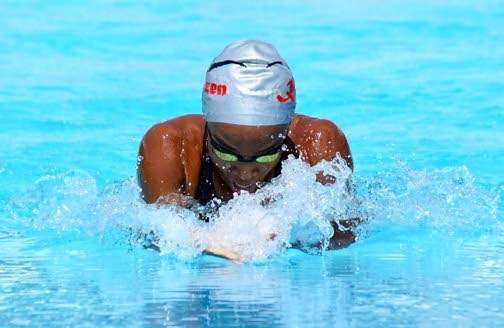 Christanya Shirley the youngest member of the team led off the girls in the 11-12 division of the 50-metres freestyle.

Shirley seeded third and swimming out of lane-3 blazed her way in the one lap event to gold for Jamaica in a new meet record.

In the 13-14 division, Kokolo Foster and Brooke Hopkins were next delivering 29-point-79-seconds and 30-point-18-seconds respectively.

In the 15-17 division, it was Zaneta Alvaranga and Gabrianna Banks that took to the starter’s horn.

Banks and Alvaranga drawn in the same heat swam their hearts out with Alvaranga mining silver in 26-point-56-seconds and Banks 6th in 27-point-36-seconds.

The event was won by Susana Hernandez Barradas of Mexico and bronze going to Chloe Farro of Aruba.