Trump Is A Racist Mobster – Ex-Lawyer Says in New Book 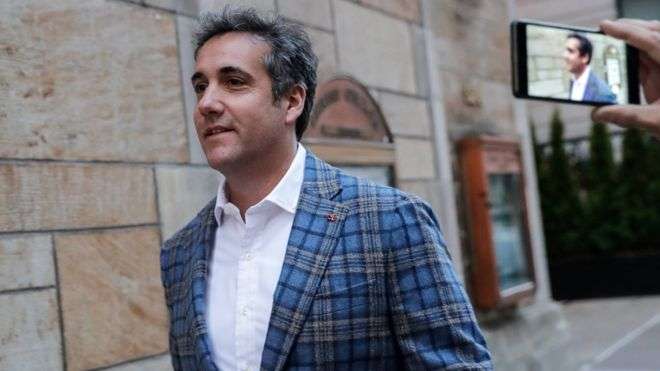 BBC – Donald Trump behaves like a mobster and has “a low opinion of all black people”, according to the US president’s former lawyer Michael Cohen.

The allegations come from Cohen’s new book, Disloyal: A Memoir, written during his jail term for Trump campaign finance violations, among other crimes.

“Cohen is a disgraced felon and disbarred lawyer, who lied to Congress,” press secretary Kayleigh McEnany said in a statement at the weekend. “He has lost all credibility, and it’s unsurprising to see his latest attempt to profit off of lies.”

In the book, Cohen alleges that Mr Trump is “guilty of the same crimes” that landed him in prison, and calls his former boss “a cheat, a liar, a fraud, a bully, a racist, a predator, a conman”. He said he had the mentality of a “mob boss”.

Various US news outlets have published quotes from the book, which comes out on Tuesday. Here are some of the key claims.

On black people and Mandela

“As a rule, Trump expressed low opinions of all black folks, from music to culture and politics,” Cohen writes in his book.

“Tell me one country run by a black person that isn’t a shithole. They are all complete [expletive] toilets,” Mr Trump once said, according to Cohen.

The words echo similar allegations, from 2018, that Trump referred to African countries as “shithole” nations.

Back then, Mr Trump told reporters: “I am not a racist. I’m the least racist person you have ever interviewed.”

Racism accusations have marred his first term and continue to be an issue as the Republican president campaigns for a November re-election against his Democratic rival, Joe Biden.

In the book, Cohen alleges that Mr Trump has “hatred and contempt” for his predecessor, Barack Obama.

“Trump hired a ‘Faux-Bama’ to participate in a video in which Trump ‘ritualistically belittled the first black president and then fired him’,” Cohen writes.

US media has since shown an old video, showing Mr Trump reprising his role as the host of The Apprentice television show and firing a man posing as President Obama.

It is believed to have been made for the 2012 Republican convention, when Mitt Romney was nominated as the Republican candidate, but it was never aired.

According to Cohen, Mr Trump once said: “I will never get the Hispanic vote. Like the blacks, they’re too stupid to vote for Trump. They’re not my people.”

His comments on Latin Americans have come under scrutiny throughout his presidency, especially after he repeatedly disparaged Mexicans during his campaign.

In 2019, President Trump told a rally in New Mexico: “Nobody loves Hispanics more.”