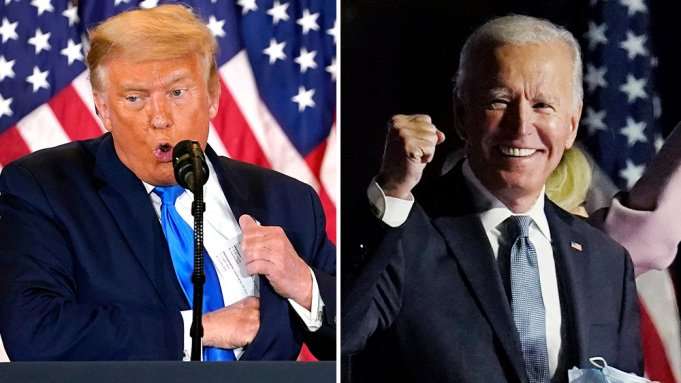 Democratic challenger, Joe Biden has taken the lead in Georgia with 99% of votes counted.

Mr. Biden has a slender lead in Nevada and Arizona and is chipping away at Trump’s advantage in Pennsylvania.

The Democrat now has 253 electoral college votes, while Republican Mr. Trump has 214.

To win the White House, a candidate needs 270.

Mr Biden has appealed for calm as the nail-biting count drags on.

But, US President Donald Trump is again alleging voter fraud in the 2020 US presidential election.

In a media briefing last evening, Mr Trump who claimed to have proof but did not provide any evidence to substantiate the irregularities being alleged, said illegal votes were being used to try and steal the election from Republicans.

The US President is also alleging election interference on the part of entities he’s describing as “big media and big money”.

Mr Trump says the election results may end up in the US Supreme Court.

More in this report from Stevian Simmonds.

President Trump is standing by his allegation that the Democrats are using fraudulent ballots to win the remaining battleground states that will decide the presidential election.

Mr Trump says he has evidence and that the election results might be brought before the highest court in the US.

President Trump says he has out performed Biden in States where the polls predicted there would have been a blue wave.

He says the polls are fake.

Meanwhile, President Trump says he’s confident that he will win a second term.

Mr Trump says his goal is to defend the integrity of the presidential election.

In the meantime, US Media say the Secret Service is sending re-enforcement to protect Joe Biden in Delaware, as more votes are counted in key states.

Joe Biden has taken the lead in Georgia over Trump.

Trump’s chances of re-election hinges on the developments in Georgia and Pennsylvania.

Here’s more in this report from ABC.

Tauna Thomas contributed to this report.