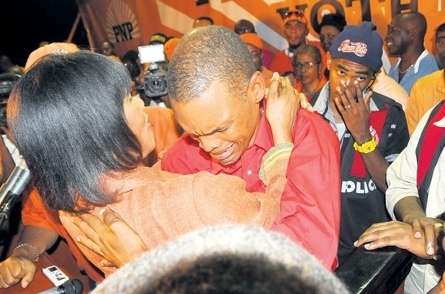 Nationwide News understands that Prime Minister and PNP President, Portia Simpson Miller, will decide the future of Raymond Pryce as the party’s standard bearer for North East St. Elizabeth constituency, in the next few days.

Pryce’s future as Member of Parliament for the constituency is increasingly uncertain following the decision of his loyalists to take the PNP to court to block last Saturdays’ candidate selection process.

Senior members of the governing party are angry with Pryce and are accusing him of committing an unforgivable act.

Our sources say Pryce has defended himself saying he did not authorize the move by his supporters to obtain an injunction against the PNP.

But he’s not being believed by influential forces in the party.

Nationwide News understands that Mrs. Simpson Miller is being urged to invoke her powers under the PNP’s constitution and install a new candidate to contest the next election.

Reports in the press have indicated that Senator Wentworth Skeffrey and the Mayor of Black River, Everton Fisher, are being considered to succeed Pryce.

But our sources say the man who challenged Pryce, businessman Evon Redman, is most likely to get the nod to represent the PNP at the next election.